The two words that changed everything

I'm not going to mince words, even though they are hard to say.

I believe routine, infant circumcision to be wrong.

Hear what I said.

I said that I believe routine infant circumcision to be wrong.

I did not say that people that have done it are terrible people (if that is true, I am first in line).  I did not say that parents who do it don't love their children, or are bad parents (I know I love mine more than I can explain).

I said that the act of routine infant circumcision is wrong.

I've been asked why I talk about it.  Or why it matters. Or been told it is not an issue of right and wrong.

The very, very first thing that struck me when I began to research this topic were these two words:

To be honest, I was offended.  I had already circumcised two of my children, and I was offended that anyone would believe that I did something cosmetic to my child's genitals.  What an offensive thought.

I pushed back my offense, wondering if my defensiveness should signal me that something wasn't right. I kept reading and researching.  I found that some insurance companies don't cover routine infant circumcision, because it is considered cosmetic. In 18 states, it is not covered by state insurance.

I talked to my obstetrician about it (OB's perform circumcisions in most states/hospitals).  I told him I didn't want to do it (with my third child).  I will spare you his exact words, as I have promised not to use inflammatory language, but to sum it up, he was extremely supportive of my decision.  He told me what I already knew-that it was cosmetic.

Then, I had my baby.  The nurse asked me if I was planning to circumcise him.  I said no.  She said "Well, good. It's cosmetic anyway".

I already knew this, from my study and research.  But it was good to hear it from the mouths of this medical staff.  I couldn't help but wonder though-why now? Why are people telling me this, only AFTER I decided not to do it? Why did no one tell me this when I was making this choice for my first two sons? Why did no doctor, or nurse say "you know this is cosmetic, right?".  Would it have changed my mind? I'd like to think so, but of course can't be sure.  But they should have said it.  I should have known that information before I subjected my tiny boys to the surgery.

The fact that it is cosmetic is one of the biggest reasons I believe it to be wrong.

When I allowed myself to really break that down, and really think about the fact that as a culture, we have accepted that it is acceptable to perform cosmetic surgery on the genitals of a newborn, I had to admit, even to myself, that that just isn't right.

Cosmetic surgery (female circumcision) on infant female genitalia was legal in the United States until 1997.  More on that later.

In January of this year, news stories of a mother having her three year old tattooed horrified readers.

Those two items are shocking to most folks, yet the cosmetic altering of baby boys is not shocking.  I had to start asking myself why.

I believe morally and ethically that cosmetically altering the body of newborns or children, routinely (meaning not to correct a medical problem) is wrong.

I believe, as a Christian, that routine cosmetic surgery on baby boys is wrong, because it implies that somehow, God was wrong-  That what He created was messed up, or ugly, or useless, and it needs to be promptly fixed. 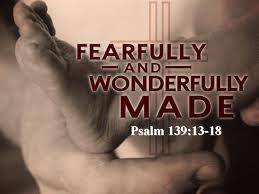 Psalm 139:13-15
"For You formed my inward parts; you wove me together in my mother's womb. I will give thanks to You, because I am fearfully and wonderfully made;Wonderful are your works....My frame was not hidden from you, When I was made in secret, and skillfully wrought in the depths of the earth"

I Corinthians 12:18 says " But in fact God has placed the parts in the body, each one of them exactly as they should be"

More on the Biblical and spiritual component later.  Yes, I know that there is circumcision in the Old Testament, and will address that soon!

I am a Christian, wife, and mom. I like to talk about important stuff.